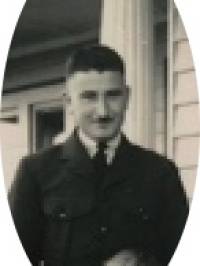 Marriage of Reg and Ena

Reg was born in Bairnsdale in 1913. He had many occupations over his lifetime. He was a pig farmer, a motor mechanic, a surveyor in the mines, a flight navigator in the Air Force, a bar tender, and a postal officer. He was a bit of a gambler, and loved to drink.

I have a few memories of my Pop. He used to like doing woodwork in his shed in Keck Street, Bendigo and I remember him making me a balsa wood aeroplane. He used to sit in his chair and eat coolmints, and he had an alligator nut cracker to crack open the almond nuts that came from the tree in his backyard. He was a big man, but a friendly man with a big laugh.

in 1937 in Bendigo. They had first met at a local dance. The story my mother tells me is that Reg walked in the door and Ena was taken with him right away. Ena, from a wealthy family, must have been very much in love to decide to marry a mechanic and pig farmer. She turned her back on all the trimmings of her privileged upbringing and her job as a legal secretary and went off with Reg. They moved to Broken Hill immediately after they married and Reg worked in the mines there. While in Broken Hill their first son Morris ADAMS was born. They then moved to Norseman in Western Australia where Reg worked in the mines as well. After that they returned to Victoria and lived in Newport where Reg worked in the local munitions factory as an engineer. As the war progressed Reg decided to join the RAAF and he trained to become a flight navigator and wireless air gunner. He was on his way to his posting in Darwin when the Japanese bombings occurred and arrived just after the declaration of surrender by the Japanese. He remained in Darwin for a short period flying various missions as the war effort wound down. He then returned to Newport and left the airforce. Shortly afterward his daughter Lyn ADAMS was born.

After the war the family moved to Taradale where his daughter Kathryn was born. While living in Taradale Reg had a bad car accident where he nearly died. He was sued by the occupant of the other car for injuries they incurred in the accident. He lost the case in court and had to pay substantial sums of money to the woman.

Reg fell ill in 1976 and died in the Bendigo hospital from Bronchopneumonia and Diabetes. He was buried in the Bendigo Cemetery. Ena remained in Bendigo, where she had been born, for the remainder of her very long life and never remarried. She was finally laid to rest beside Reg in May 2004.