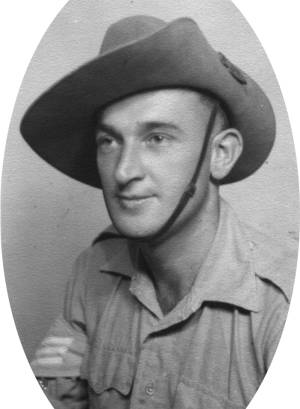 Marriage of Keith and Jean

Keith Thomas JOHNSTON was born in Birregurra on 18th May 1915; The 3rd child, and only son, of Arthur Thomas JOHNSTON and Eliza Ethel JOHNSTON (formerly ENNIS). Keith spent his first few years of life in Birregurra before moving to Cressy and then Little River. Later the family moved to Hurstbridge and then Panton Hill.

Keith worked as an Orchardist as early as 1937 in Panton Hill and helped out at the Cracknell Orchards in Panton Hill. He also worked as a shearer on his father Arthur's sheep farm when they lived at Little River. He played Australian Rules Football and cricket. His best friend was Colin ROGERS; Colin married Keith's sister Joyce.

The Advertiser newspaper records that Keith was playing cricket for the Hurstbridge Imperials on 18th March 1939 in the grand final. The newspaper records the event as “Under a cloudy sky at Queenstown last Saturday, Hurstbridge Imperials went in to bat against Hurstbridge in the grand final. The Imperials still had two men at the wicket when the stumps were drawn owing to the light becoming bad. The scoring was particularly slow during the innings. Scores: IMPERIALS 9/143. Cecil VERSO 11, L BERTRAND 14, Jack PIMM 3 (played for Collingwood Football Club), Harry PILL 5, Keith JOHNSTON 2, Alan CUMMINGS 15, R CUMMINGS 1, H SUTHERLAND 6, Hector BELOT 0, R CUMMINGS 73 not out, William SAVILLE 2 not out, Sundries 14. Richard (Dick) SMITH was the most successful bowler and took 4/29”

Keith enlisted in the Royal Australian Army on 16th November 1939 and joined the 2nd AIF 6th Division Special Forces as a Corporal. He was posted to the 2nd 8th Infantry Battalion at Puckapunyal on 21st November 1939. He was 24 years and 6 months old when he joined. His enlistment record states that he had black hair and brown eyes.

Keith was admitted to Camp Reception on 5th July 1940 with Influenza and discharged to duty on 7th July 1940. He fought in Kilo 89, Bir Salim, Alexandria, Greece, and the Middle East. He was trained at No 12 Mortar and Grenade and Middle East Weapons Training school.

Keith fought in Greece from 31st March 1941 until 29th May 1941 when he was evacuated for catching Chicken Pox. He was discharged to the 19 Australian Infantry Battalion on 17th June 1941.

Keith contracted Tonsilitis on 4th July 1941 and was discharged from the convalescence hospital on 11th August 1941 to 19th Australian Infantry Battalion. Keith then transferred to the 98th Battalion on 1st September 1941.

On the 2nd November 1941 Keith had a disagreement with his A/CO and cited with “Conduct to the prejudice of good order and military discipline” and was “severely reprimanded by A/CO of the 2nd 8th Battalion”.

Keith was promoted to Acting Sergeant of 2nd 8th Battalion on 18th January 1942. He embarked on the “Aronda” on 13th February 1942 and arrived in Australia on 29th March 1942 (almost 2 years after leaving Australia). Keith's rank of Sergeant was confirmed on 26th February 1942.

Keith married Jean BROWNE on 30th April 1942 while on leave in Australia. They married on 30 April 1942 at St Marks Church of England, Hurstbridge.

After getting married Keith returned to duty in the Northern Territory Force School No 2 Carrier Course on 3rd of June 1942. He then attended the No 12 Map Reading School NT Force. On 16th June 1943 he transferred to Victoria, then to Queensland on 5th August 1943.

Keith travelled to Cairns on 7th November 1944 and then to New Guinea on 12th November 1944 with 2nd 8th Battalion. Keith fought in New Guinea and was promoted to Warrant Office class 2 on 31st July 1945. He transferred to Wewak on 28th August 1945 and disembarked from S.S. Gorgan at Sydney on 4th September 1945.

Keith discharged from the Army on 2nd October 1945 at Royal Park. His discharge papers record him as being 30 years old, and 5ft 6in tall with brown eyes, dark hair, and dark complexion. He served for 2153 days of which 961 were active service in Australia and 1017 were active service out of Australia. He was awarded war badges for the Middle East from 14th April 1940 to 29th March 1942 being 715 days, and Aitape from 7th November 1944 to 4th September 1945 being 302 days.

Keith served in Palestine, Egypt, Crete, Greece, Libya, Syria, Suez, and New Guinea and gained the rank of Warrant Officer class 2 before being discharged at the end of the war.

So it seems Keith went off to war just after his mother had died and by the time he returned from the war his father had remarried. Keith and Arthur did not see eye-to-eye on some things. Particularly, Arthur was a Methodist and didn't drink alcohol, whereas Keith liked to drink beer and became a worshipper at St Marks, Church of England in Hurstbridge instead of continuing the strong family tradition of Methodism that had been in the family ever since John JOHNSTON emigrated from Ireland in 1855.

Colin ROGERS and the PEPPER brothers built Keith's house in Anzac Avenue, Hurstbridge. There was an old house on the property that was demolished to build the new house.

Keith and Jean and children lived in Anzac avenue until 1955 when they moved to the house adjoining the shop in Main Road Hurstbridge.

Keith's father Arthur died on the 8th April 1956 from stomach cancer. Arthur had always smoked a pipe and this may have contributed to his death.

Keith operated his greengrocery from the shop in Main Road until his death in 1969. Keith would service all the shops in the area with fresh vegetables, including his uncle Erskine and auntie Martha KILPATRICK's store at Mernda. Dot WALLIS (formerly KILPATRICK), Keith's cousin, remembered Keith and my father (Laurence) making deliveries to her parent's shop when she was a child. My father remembers many trips with his father Keith in his father's truck from Hurstbridge to the Vic Markets in the early morning to purchase the produce for the day and bring it back to the shop and unload it.

Keith enjoyed his sports, was a keen gardener, and loved growing roses. There was a Johnston trophy at the Hurstbridge football club for many years.

Keith died at home on 27th July 1969 from a heart attack aged 54 years. He was cremated and buried in Fawkner crematorium on 30th July 1969 in the 6th Avenue Cross of Roses.

Jean inherited the greengrocery when Keith died, however she sold it to Peter McDOUGALL & ASSOCIATES on the 1st October 1971.

1939 Formation of the Hurstbridge branch of the ANA

1943 Electoral Roll for Arthur and Keith JOHNSTON at Hurstbridge

1949 Electoral Roll for Keith and Jean JOHNSTON in Hurstbridge